Silence is golden. At least at two in the morning it is. Sadly my neighbours had a different point of view, and returning at two they decided that MTV at the loudest possible volume was just what the doctor ordered. To the local trio’s credit, and to give you a sense of quite how wafer-thin the walls of my guesthouse  are, they did lower the volume of their TV after I sat up in my bed and loudly shushed them. The sleep that did eventually follow was far from deep, and I mention this only as a broken night can have a real wipeout effect, especially when you’re trying to watch silent films. Monday as such weighed heavy with the veil of certain exhaustion. 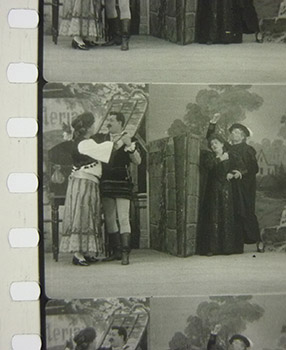 Not that the programme was any worse for that, as two rather distinct shows gave the notion of silence in cinema a run for it’s money. The first was a collection of German Tonbilder, a short programme of recorded songs and recitals from cinema’s first decade. From operettas to cheery drinking songs, these titles were created by separately recording the song, and then having very same singer performing and miming the song live on camera. A bit like Top of the Pops, if you will. Many of the films were known, but only recently were German archivists able to match extant discs with the surviving films, and having meticulously synced up the two as far as possible the result is really quite uncanny. That most of the songs seemed to revolve around boudoirs, sex work, and drinking didn’t hurt either.

The second much grander sonic experience of the day was the much vaunted Japanese Benshi show in the evening. While almost all the earliest films shows across the globe regularly relied on a real-life narrator or lecturer, the tradition of having a living breathing person standing alongside the screen faded away as narratives became more complex and as the art of intertitles grew into maturity. Except in Japan, where the discipline and traditions of the film-explainer became enshrined in the role of the Benshi. Sometimes they would just read the intertitles and elaborate on them, sometimes if the film had foreign intertitles they might just make up the whole thing as they went along. Others would completely undermine the film, or perhaps go off topic, or indeed go on topic, pretending the film was about a recent news story. The discipline grew and changed throughout the silent era, and sound was late coming to Japan as the Benshis repeatedly went on strike against the technology that would render them useless.

The tradition of the Japanese narrator would now be completely extinct were it not for the efforts of a very small cadre of historians and performers who have chronicled this discipline, and who also keep it alive giving performances to Japanese silent films. The Pordenone silent film festival has turned into a regular showcase for this historic art, and Monday night offered a grand performance of the film Chuji Tabinikki accompanied by the Benshi Ichiro Kataoka, as well as a percussionist, a pianist, and a fellow on the traditional guitar-like Shamisen. Some Benshi shows I have seen in the past have been so elaborate and involved that they obscured more than they enlightened the film, but not so with last night’s performance from Kataoka-san and the Otowaza Ensemble. In a historic film that involved bandits, police, a lot of stern looks, a fair amount of sword waving, the subtle interjections from musicians, and the wavering tones of the Benshi, explaining, miming, and generally making the grunts and wheezes seen on screen brought the film to life in a strange manner. Overall I was grateful for any kind guidance in a narrative which didn’t make any concessions for those uninitiated to Japenese feudal society. There is a strange comfort of coming out of a film like this and realising that you were far from alone in wondering what the hell was going on.

A strangely dissonant moment was however coming out of a 1914 adaptation of Uncle Tom’s Cabin. “Wasn’t that brilliant?” “What a performance from Sam Lucas as Uncle Tom!” “How about the photography in that, hey?” was the wider chorus I met, but personally I felt the film left no lasting impression at all. A grounded performance from Sam Lucas certainly did stand out when set against the histrionics of the rest of the cast, and notable as a performance from an African-American surrounded by several white actors in black face. Yet the film struck me as a curiosity more than a lesser masterpiece. But that is an oblique pleasure of the festival, as you never can be sure of any critical consensus as you stumble out of the theatre. One person’s treasure inevitably turns out to be a snooze-fest for the other, and more than a few wines have been spent trying to work out exactly how we ended up at such critical distant poles. It’s tough work I tell you. 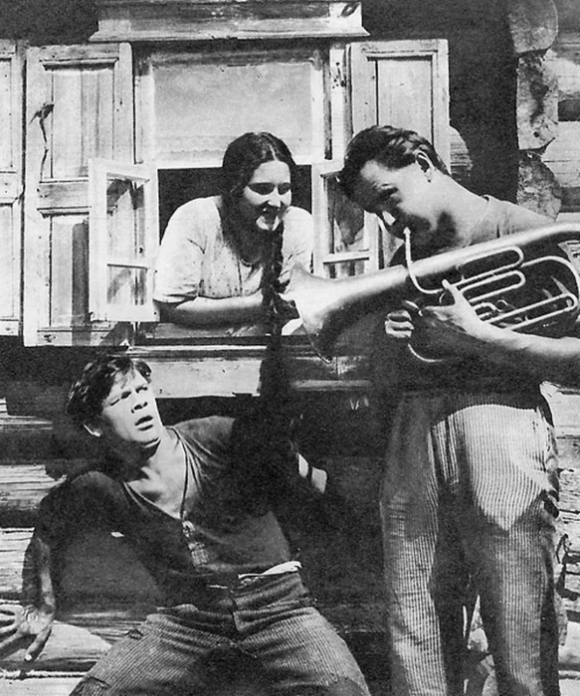 That said most folks I met did concur that Dva Druga, Model i Pordruga was a surprisingly light and charming Soviet comedy. Translating roughly as Two Friends, a Model, and a Girlfriend the internet-meme minded among you might be making lather lewd insinuations at this point, but the titular model turned out to be a prototype for a crate-making machine. The two buddies spend much time knocking heads on creating a device which will revolutionise production in the soap factory they work in, and it is with great worry that a local crate-manufacturer/capitalist views their progress. “With this technology we will destroy Capitalism!” read one enthusiastic title, and of course the arch-villain crate-making industrialist sets out to scupper their plans every step of the way. More than a bit mad-cap, slap-dash and knock-about, Dva Druga, Model i Pordruga was a welcome mid-morning break, and while not on the side-splitting end of the comedy scale, it certain did amuse.

Coming to the end of what felt like an incredibly long day I decided to sacrifice the near-midnight screening of Der Tunnel for an early night. It can’t be that good I thought, only to be regaled by my Finnish friend Jaakko the next morning of what a surprisingly treat it was. They build a tunnel between France and New Jersey. No great characterisations, he says, but really striking visuals, a really stirring story. Well you win some you loose some. Hopefully the next film I choose to cut won’t be the universal highlight of the festival, but heaven knows that has happened before.