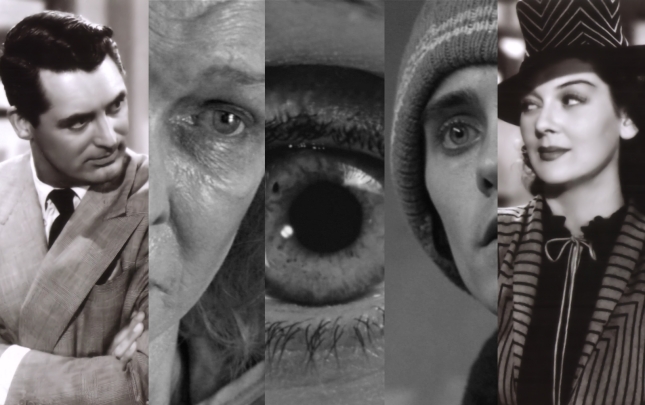 You could argue endlessly about the most overlooked job in the film industry, but I’d make a strong case for that of the editor. Many would say that their role falls into the realm of striving for seamlessness; unnoticed if done well. But that’s doing these crafty cutters a great disservice, as continuity and the impact of the edit can be tremendously powerful devices. As proof were needed of the fact, seeing my friends stumble out of the living room absolutely shell-shocked after seeing Requiem for a Dream was a timely reminder of the combined power of music + cutting to wholly traumatise the hapless moviegoer.

In my own misadventures I remember getting into an argument with one of my tutors about a scene in His Girl Friday, and the power of straightforward continuity. The scene in question comes seven minutes into the clip below.

It’s a blink and you’ll miss it cut, but just as Cary Grant picks up and then drops Rosalind’s be-ringed hand, the next shot shows him holding the hand again. I spent a good five minutes arguing that it must be a mistake in the edit, but it turns out it was the classic ‘Cary Grant Double Take’ which pops up in countless other films. I’ve only spotted it in North by Northwest, but still, lesson learnt:

– Hollywood Does Not Make Mistakes. Everything is Deliberate –

So taking this lesson and applying it to later work in the oeuvre of Steven Seagal, the repercussions become quite serious. It’s all fine and well having a chuckle at things stumbling along, but there comes a point when the mistakes are writ so large that they just can’t be mistakes. Unfortunately we cannot discount the whole of Kill Switch as a grand mistake, for in its opening scene there comes a challenge to conventions of Hollywood continuity, a challenge so bold that it posits a complete tabula rasa of editing as we know it. Not quite a jump back to year zero, but rather a jump to the year 1903.

With moving pictures barely a few years old, the visual grammar of continuity we understand today had only just been embarked upon. Narratives were mostly limited to single scenes, much like the theatre, with action entering from the sides. Other early films kept to the school of what Tom Gunning has defined as the Cinema of Attractions* borrowing heavily from the worlds of the fairground and the vaudeville theatre, with one-act spectacles of wonder or contortion. Moving pictures were a spectacle in and of themselves, and the first film subject tended to be equally spectacular.

The change towards film with a more straightforward narrative came in the first decade of the century, and plenty has been said critically on that matter. The path to Hollywood continuity as we know it today was long, but even at this earliest stage can be noted some attempts to create a different visual discourse, less conventionally linear and with greater focus on repetition. A prime surviving example of this is to be found in the Edison company’s Life of an American Fireman. Stories of fire, imperilled women/children and daring rescue were all the rage in the early 1900s, and Life of plays straight to this early genre.

While the film itself might not strangle the attention of the average modern viewer, it is important to note the peculiar repetition of action. The sequence inside the burning house is played out in full before the action cuts to outdoors, and the viewer is then treated to seeing the complete action from a wholly separate perspective. The multiplicity of angles is primary above the linearity of continuity, and while jarring to the modern eye, this approach made a lot of sense to early audiences still open to the as yet undefined grammar of film. To borrow a term from Charles Musser** there is a ‘malleablility of temporality’ wholly lacking in most modern cinema. It flies in the face of anyone who might see these films and consider them primitive or simple.

Full respect then to the director Jeff King and his editor Jamie Alain with their work on Steven Seagal’s Kill Switch, a film which in one scene pays both homage to Life of an American Fireman while simultaneously challenging all modern understandings of continuity in Hollywood cinema. 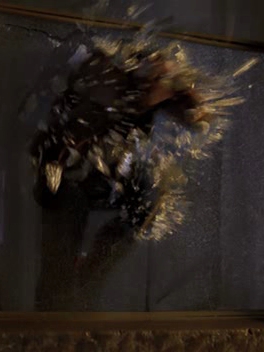 In the sequence of one man getting kicked out of a window there are seventeen separate cuts, seven different perspectives and a complete recasting of temporality. It would take a matter of seconds for a body to hit the ground after being thrown out of a third storey building, yet in this sequence the action takes close to half a minute, stretching the horror of falling into an absurd, almost hovering sensation of crushing inevitability. The guilt of Seagal’s corrupt character is given no space to hide in the brevity of his decisions, his actions, its consequences are played out again and again, challenging the viewers ingrained positive disposition towards Seagal as an actor and transmutable character. The jarring punctuation of the scene with the clichéd one-liners typical of the action genre establishes an unease which fails to let up at any point in the film.

There is something bizarrely uncompromising about this film, and its debt to early cinema is astonishing. Almost more astonishing is role Seagal himself played in the writing, producing and selling of the film, and there’s more to come on that.

* For more by Tom Gunning on the Cinema of Attractions, check out Early Cinema: Space Frame Narrative (edited by Thomas Elsaesser)

** Musser has written extensively on this film plus Edison’s early film history in History of the American Cinema to 1907: The Emergence of Cinema. His extensive history of early Edison director/cameraman Edwin S. Porter can be found online in Before the Nickelodeon.

Through the course of my daytime adventures/studies I have the tremendous fortune of attending a number of conferences, and more importantly festivals dedicated to the dead art of silent cinema. It baffles many people how anyone could ever be so obsessive with something so ‘primitive’ and ‘arcane’ something so abstract to what we know and love, what with the All-Singing All-Dancing Technicolour Widescreen Real-D Surround Sound Cinema of today.

Many would be quick to rebuff any such harsh judgements, but of course I see where the layman might be coming from. Grubby unclear films, with little people running around at supernatural speeds to the merry plink and plonk of the honky-tonk piano can easily seem pretty Neanderthal.

Needless to say this is a pretty cruel vision of silents, coloured by decades of worn prints being show at 50% the speed they should be running at, with picked-out-of-a-basket soundtracks slapped on to fill the silence. Silent film festivals are about reversing that, reviving living soundtracks with both improvised and especially scored music, showcasing some of the finest film restorations from across the world. Films that demonstrate the birth of a medium at one end, and the perfection of it at the other.

It baffles me that anyone who claims to love film could possibly keep themselves away!

Last weekend saw the annual British Silent Film Festival set up shop in the imposing Barbican centre in central London, and for 3 (and a half) days the organisers did an excellent job of putting on some amazing talks and performances around some know, and some lesser know films from the silent era. The topic of ‘Sound’ was the focus of the festival, looking both at the early experiments with sounded motion pictures, as well as looking at the issues faced by modern musicians tasked with accompanying these films. The latter in particular proves a fascinating meeting point for film historians and improvisational musicians. 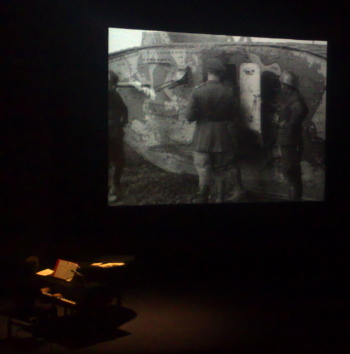 A presentation by Toby Haggith of the Imperial War Museum and the musician Stephen Horne looked at the arguments for and against the use of cue sheets provided with the First World War propaganda film Battle of the Ancre and the Advance of the Tanks. Is it right to impose a modern score which might colour a film as elegiac? A soundtrack to the living dead marching off to what we widely regard today as a futile battle? The film was shot with optimism that the war could now be won, and that the tank in particular was the one device which could potentially break The Hun. Cue sheets from the time can be equally problematic, with no connection to the action on screen, and sometimes with unwittingly dangerous associations to the modern ear. One reel of The Ancre cited Entrance of the Gladiators as the appropriate backing music, yet little did music arrangers in 1917 appreciate quite the clownishly insensitive connotations this would have in the latter part of the century.

Other musical treats in the festival included a morning of bizarre early sound experiments showcased by film historian Tony Fletcher (Teddy Brown and his Xylophone being my particular favourite),  a screening of Britain’s first complete sound feature Under the Greenwood Tree (a curious if occasionally quite stilted take on Hardy’s classic), an orchestrally accompanied screening of Griffith’s classic damsels-on-ice-floes-thriller Way Down East (complete with crash-bang-wallop radio style sound effects), as well as a one off performance of the silent western White Oak accompanied by Five Live’s own Mark Kermode, The Dodge Brothers and Neil Brand!

If the quiff and the double bass wasn’t a big enough indicator: That’s him to the far left. He’s even been so generous as to slam modern bombastic cinema (a la Michael Bay) for having forgotten the ‘melody of melodrama’ so apparrent in silents. To hear his reflections on Moderns vs Silents, as well as the White Oak performance click HERE.

Kermode’s promised more shows in the future, and I can’t wait. Not so much to hear some more bass-slappin’, string-pickin’ Americana to my silents but also to help drag in some more Kermode fan-boys and girls into the slightly hidden world of silents. I had the opportunity to tempt two of my ‘normal’ film friends to two of the evenings performances and they absolutely loved it. The varied tempo, the melodrama and the occassionally baffling plot lines can be hard work at first, but once you settle into it you really do get a brilliantly unique, fascinating, and often gripping film experience. 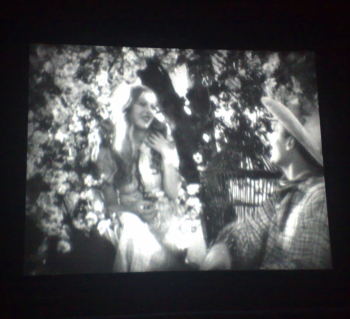 The Barbican play regular host silent screenings throughout the year, and a number are regularly doing the rounds on art house cinema circuits around the country. If you hear of one coming to town with a budding musician or two in tow then really do go out of your way to check it out.

It may well be a notch or two outside most peoples comfort zone, but how can you continue to live oblivious of an era where square-jawed male heroes could regularly cry with relief for romantic and narrative resolution, and where dogs were regularly used as the ultimate Deus ex Machina? If that isn’t amazing, then I don’t know what is.