Swedish wisdom has it that the fond child has many names, and by that measure there must be hella-lotta-love for the first Video Nasty on the list. Not living up to its suggestively surrealist British title – Absurd, it does live up to other titles such as Rosso Sangue and the truly descriptive Horrible. Cheap & Cheerful could have been another option for the Italian filmmakers, but instead the given title seems to be Anthropophagus 2, vaguely related as it is to Anthropophagus (1). Ironically that’s next on the DDP list, so more on that soon.

Using John Carpenter’s Halloween as its basis, Anthropophagus 2 adds one dash of crusading priest from The Exorcist, a pinch of axe-wielding action from The Shining, and a bearded quasi-invincible Greek maniac from… Greece. It’s never made clear quite what drives this Hellenic psycho, but he seems to relish killing people in particularly gruesome ways. But then again, I guess that’s the point. Yet, you can’t say he –enjoys- killing, as he just seems to be angry and frustrated about the matter. He takes particular care and attention to do things as slowly and tortuously as possible, and his complete lack of visible reaction to these gruesome actions is what probably irked the censors in the first place. Lord knows it irked me.

The horror of the relentless and driven killer is the key to any good slasher film, but the unmasked, Puma sporting, bearded Greek took some time to be established. To all appearances he seems normal, he’s just being chased by a mysterious and quite sinister priest. He debilitates himself in surprisingly unspectacularly fashion on a spike fence, stumbles in dying in a family home, but then regenerates magically on the operating table. The doctors are stunned, the mute Greek rises, and goes on a wrecking campaign against the good medical folk who saved him. Most ungrateful.

While the priest and the police talk in circles about the why’s and the what-for’s the Greed Greek takes to killing some more innocents in brutal fashion. He eventually returns to the family he initially stumbled in on, and terrorizes them, shoving the poor wife’s head in an oven. The bed-ridden, compass-twiddling daughter then breaks free from her restrictive medical gear to launch into the ‘last-woman-left’ role with absolute gusto.

The results speak for themselves in the delightful screengrabs. The motivations behind the killer, and the whole story itself are wholly beyond me. The plot lurches from scene to scene, and while the repetitive scale-racing soundtrack is cheery enough, the film just isn’t Absurd enough to be just plain funny. Fingers crossed syllable heavy Anthropophagus (1) can shed some light and what kept this manic Mediterranean sort going.

I had the tremendous fortune of catching this documentary at last autumn’s Docfest in Sheffield. Primarily drawn by promises of an intimate portrait of an illustrating legend from 2000AD, I ended up sucker-punched by one of the rawest and most honest documentaries I’ve ever seen. Charting the woes of graphic artist Johnny Hincklenton and his battle with Multiple Sclerosis, you’d think it would all end up heavier than a lead balloon. And it is, only with a human face and a pitch-black sense of humour.

The film is interwoven with illustrations and art works by the subject himself, and his vivid and occasionally horrific visuals set an oddly ‘sharp’ tone. Johnny is pretty much in constant pain, and he makes no bones about it: its shit, its hell and he absolutely hates it. It’s his cross to bear, and while he’s eternally grateful to still have control in his hands, he’s terrified by thought of slowly becoming locked in his own body.

For as much as the film is a portrait of a man, it is also an investigation of MS itself. Tackling the issue head on, it covers all the details about a condition which has become a bit of white elephant in the Western world. Everyone seems to know someone who knows someone who has been affected by the disease, and the film came as a dangerous wake-up call on how pitifully little I knew myself. It also goes into the issue of euthanasia, and Johnny’s wishes to be able to pull the plug on his life we he sees fit. As he says himself, it’s his personal ‘fuck you’ to MS.

The filmmakers have achieved something amazing, and the film’s been duly recognised with two Grierson awards, a first in the competitions history. The suits upstairs have for once recognised this, and the film’s TV premiere is on More4 on the 17th of February at 10:00 pm.

Not to sound like a clichéd trailer voice-over, but seriously, if you only see one documentary this year make it this. I would also suggest you make an effort to see more than just one documentary, but whatever you do put this one first on your list.

Good horror films always have a nasty tendency of lingering beyond the cinema auditorium, and the creative forces behind these features always boast of the nightmares they weave into the minds of the impressionable.

And while it’s enjoyable enough to allow Wes Craven, John Carpenter or even Old Man Romero to come tickling and torturing the primal fears lodged in our Id, there’s a big place in my heart for the cheaper, smuttier horror which you just can’t wash off your hands.

While people and publciations love churning out top-whatever lists, year after year, there is only one list truly worth my love and devotion. It stands above all other lists as goverment approved and bound in legislation: it is the Video Nasties list, compiled by the British Director of Public Prosecutions as films wholly unsuitable to delicate British eyes. 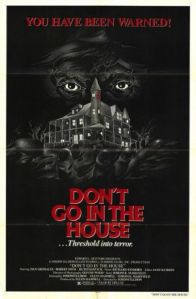 It is without doubt the number one shopping list for the grottiest end of the horror genre.  You might have come across a few, with titles like The Driller Killer, The Last House on the Left and (perhaps most famous of all) The Evil Dead all finding success on the fringes of the mainstream. They are all prime examples of films peppered with scenes, icons, motifs you just can-not forget. So where better to train my already Burnt Retina?

As a side project within this blog I will be trawling my way through all the video nasties I can possibly get my hands on. By hook or by crook, whatever format’s doing the rounds I will set myself down and watch ’em.

With over 80 titles to get through it’s going to be hard work, but no doubt there’ll be some fine gems out there. I’ll be progressing in alphabetical order, so lord knows how I’ll fare having to watch four films with the prefix DON’T in their title. How many cannibal films will I be able to stomach? Will I be able to cut it through dozens of slasher rip-offs? How much badly dubbed Italian can I endure?

Time will tell. Stay tuned for more, starting with A very soon.